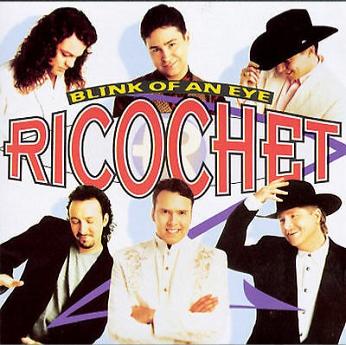 Formed in Oklahoma the band recorded 3 of its 6 studio albums for Columbia Records. The first disc climbed to the very top of the Billboard album chart, and remained there for a year and went GOLD. The second album, In The Blink Of An Eye, was also a Top 10 disc on Billboard.
Billboard magazine named Lead singer, Heath Wright, it's Top New Country Artist,and the band was awarded Top New Vocal Group by the Academy of Country Music (ACM.) The band has scored three Top 10 hits. "Daddy's Money, reached the very top of the Radio & Records (R&R), Gavin, and Billboard charts where it stayed for 2 weeks; The very first single "What Do I Know," reached number 5 on both Billboard and Radio & Records and became "The Fastest Rising Single of 1996," The third single "Love Is
Stronger Than Pride," reached #9 in both the US and Canada and was included on the soundtrack of the TV series, WALKER TEXAS RANGER.

Ricochet has performed on two USO Tours: Operation Season's Greetings 2000 and Operation 2001, taking the band to Japan and Korea, Spain, Sicily, Germany, Macedonai and Portugal to perform for the men and women of our Armed Services.

Ricochet is an excellent performance group, ---often referred to as "The Hardest Working Band In Country Music." They're available for fairs, festivals, casinos, theater dates, on cruises, clubs and private events.

The band had met Dale Earnhardt at Talladega Speedway in October 2000, then watched him win that race. There had been an instant connection. Ricochet was on its way back home from a tour on Feb 18, 2001 when it heard about Earnhardt's crash at Daytona International Speedway, that lead to his death and were inspired to write this song.

"For a bunch of us, NUMBER 3, has special meaning.
Here's our tribute to Dale and Dale Jr.  Race on!" 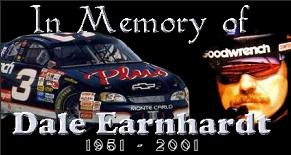 "Love Is Stronger Than Pride,"

"He Left A Lot To Be Desired."

"It's Alright"
(originally recorded by
THE IMPRESSIONS)